All components on tomhiatt.net are Copyright 2015 Tom Hiatt

"Tom Hiatt's cowboy music is true and honest. He is not only a great entertainer,
he is a cowboy and a gentlemen. Tom always draws huge crowds and captivates the audiences."
Miss Kitty, The Cowboy Corral   Sedona, Arizona

"It was such a pleasure working with you at the 'Warm Up to the Valley of the Sun'
event in Chicago. The audience loved your stage presence and your western songs.
You have a voice that can capture an audience!"
Laurel Pendle, Tourism Sales Manager   Scottsdale, Arizona

"What a fantastic entertainer! After that response, it's obvious we're now going to have to
make him a permanent fixture at every one of these 4th of July events!"
Kristy Flynn, Black Tie Arabians   Dixon, California

"Tom Hiatt is one of the biggest crowd pleasers
I've heard in a mighty long while. Our attendees couldn't get enough !"
DR "Buck" Montgomery, Director - Wild Western Festival     Phoenix, Arizona 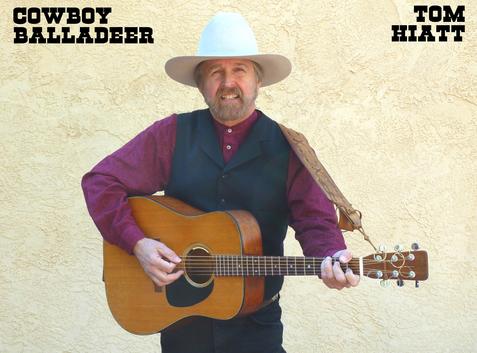 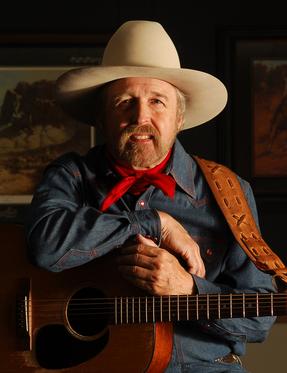 Award winning singer, songwriter, guitarist, TOM HIATT, can truly be called a “Son of the West” because at one time or another, Arizona, Texas, California, Alaska, and Kansas have all been called “Home.” The magnificent landscapes and the people who live in them fill the stories in the ballads Tom writes and sings; working cowboys, historic legendary characters, changes in the modern West, and more.

Tom’s warm, emotion filled voice has enthralled people from Montana to Arizona, from the Pacific to the Atlantic, and all areas in between. He has appeared with other popular cowboy singers and poets such as Ian Tyson, Chris LeDoux, Waddie Mitchell, The Sons of the San Joaquin, Sourdough Slim, and Don Edwards, at many cowboy poetry and music festivals throughout the country. Some of his other engagements have included TV and radio programs, rodeos, schools, universities, museums, and guest ranches. He has been interviewed on the NBC Nightly News and has also sung the National Anthem at a Major League Baseball game in the Arizona Diamondbacks ballpark. More noteworthy appearances include, the Autry National Center, the Kamloops Cowboy Festival, the Carson City Rendezvous, the Tombstone Western Music Festival, the Lone Pine Museum of Western Film History, and the Western Music Association’s Showcase and Awards Show. Tom, along with his band “The Sundown Riders,” performed for over 18 years at “Rawhide,” Arizona’s popular 1880’s western theme park.

“The Silver Screen Cowboy Project,” a compilation CD that includes some of the most popular acts in western music today, such as Dave Stamey and Bill Barwick, features Tom singing his original tune “Rough Ridin’ Cowboy Heroes” for the opening song. It was the #3 “most popular song on Heartland Public Radio. Tom’s Lucky Horse Records CD, “Appaloosa Moon”, was already ranked #1 on the Western Music Association‘s album charts upon its release. Some of the west coast’s finest musicians joined Tom on the project. His latest Lucky Horse Records CD, “Goodnight from Texas,” is receiving outstanding reviews and has been nominated for the 2015 Western Album of the Year by the Academy of Western Artists.

Tom’s show repertoire includes traditional and contemporary western classics that are always a “hit” with audiences from all walks of life. They enjoy most Tom’s original ballads that have been inspired by his own cowboying experiences, as well as those of other cowboys he has been proud to call his friends through the years. Time spent listening to Cowboy Balladeer Tom Hiatt is guaranteed to bring a smile to the face and warmth to the soul of anyone who loves the great American West.